You are here: Our School » Newsletter » Trips and Visits » Dorset
Our School

The year 11 Geography students (and a few History ones too) went on a trip to Dorset in order to observe geographical formations, and put their geography skills to use. It was the worst possible day for a trip due to the rain; however, it was a trip worth remembering for many reasons.

We hiked through mud and stones on our way to Old Harry Rocks. The path was a mile long and many grew tired due to being drenched from the rain.
The view was impeccably beautiful. The experience of the salty wind from the highest point of the cliff was worth the laborious walk.
Old Harry Rocks, the chalk formations, were created through thousands of years of erosion by the sea and were originally a part of the chalk ridge-line that runs across the south coast joining up with the Needles on the Isle of Wight.

On the beach, we were able to see sea defences, such as groynes, in use.
We were already wet so some decided to plunge into the sea, some decided to swim, some collected pebbles and some were adamant on staying on the coach. Later we had a quick dash to Swanage Town Centre to look around before boarding the coach back to the hustle and bustle of London.
Overall, we all had a fun experience, despite the weather and were able to use our geography knowledge to practical use. 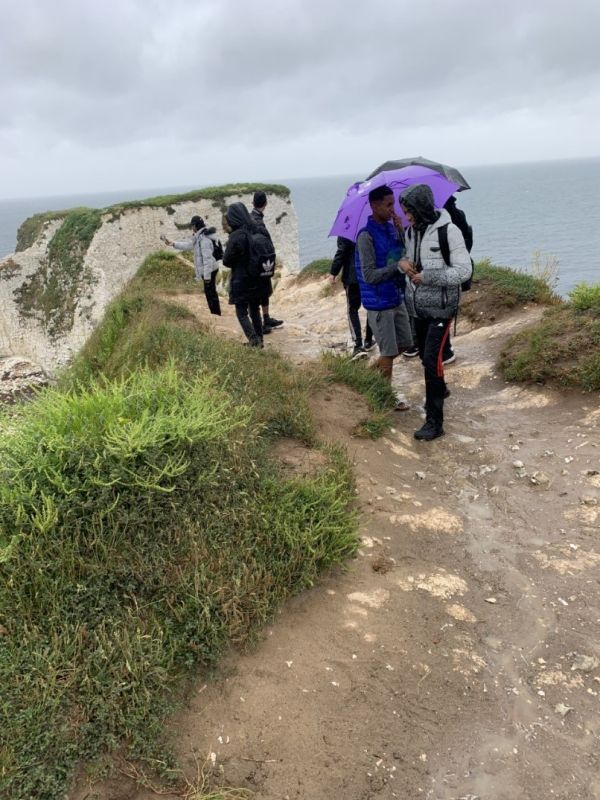 How Do I Join?

DLR to Shadwell or overground

Underground to Aldgate East or Whitechapel