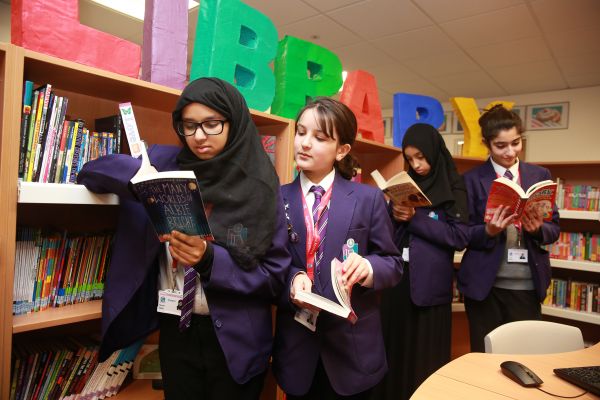 As a parent, you can support your child's reading at home.

Simple things like reading together and visiting your local library (click here to find your nearest Idea Store) can improve your child's reading and encourage them to read for pleasure.

For more useful tips, click on the link below.

You might also find our Reading Lists at the bottom of this page useful, as each one lists age appropriate books in different genres.

Destitution – noun. Poverty so extreme that one lacks the means to provide for oneself.

Propaganda – noun. Information, especially of a biased or misleading nature, used to promote a political cause or point of view.

Patriarchy – noun. A system of society or government in which men hold the power and women are largely excluded from it.

Voracious – adjective. Engaging in an activity with great eagerness or enthusiasm.

Abolish – verb. Formally put an end to a system, practice, or institution.

Urbanisation – noun. The increase in the proportion of people moving from rural areas to live in towns and cities.

Perspective – noun. A particular attitude towards or way of regarding something; a point of view.

Evaluation – noun. The making of a judgement about the amount, number, or value of something; assessment.

Probability – noun. The extent to which something is likely to happen or be the case.

Gradient – noun. An increase or decrease in the magnitude of a property (e.g. temperature or pressure) observed in passing from one point or moment to another.

Remorse – noun. Deep regret or guilt for a wrong committed.

Posture – noun. The position in which someone holds their body when standing or sitting.

Familial – adjective. Relating to or occurring in a family or its members.

Suffragette – noun. A member of an activist women's organisation in the early 20th century who fought for the right to vote in public elections.

Tessellation – noun. An arrangement of shapes closely fitted together, especially of polygons in a repeated pattern without gaps or overlapping.

Genome – noun. The complete set of genes or genetic material present in a cell or organism

Ageism – noun. Prejudice or discrimination on the grounds of a person's age.

Deforestation – noun. The action of clearing a wide area of trees.

Diametrically – adverb. Two things that are the complete opposites.

Ocular – adjective. To do with the eyes or vision.

Phalanx – noun. A body of troops or police officers standing or moving in close formation.

Vacillate – verb. Waver between different opinions or actions; be indecisive

Utopia – noun. An imagined place or state of things in which everything is perfect.

Levity – noun. The treatment of a serious matter with humour or lack of due respect.

Derelict – adjective. In a very poor condition as a result of disuse and neglect.

Mawkish – adjective. Sentimental in an exaggerated or false way.

Eminent – adjective. A person who is famous and respected within a particular sphere.

Wherewithal – noun. The money or other means needed for a particular purpose.

Finicky – adjective. A person who is fussy about their needs or requirements.

Brandish – verb. Wave or flourish (something, especially a weapon) as a threat or in anger or excitement.

Epitome – noun. A person or thing that is a perfect example of a particular quality or type.

How Do I Join?

DLR to Shadwell or overground

Underground to Aldgate East or Whitechapel